The Perfect Dress Atlanta
BY APPOINTMENT ONLY

Retail and restaurant hours may vary during this time.  Please call the store or restaurant you wish to visit, for your convenience, to confirm operating hours before visiting. Phone numbers can be found on our store directory page. 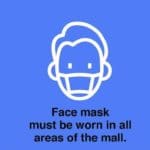 The following store are currently selling Face Mask for your safety:

Click here to view our New Policies and Procedures 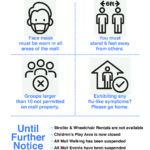 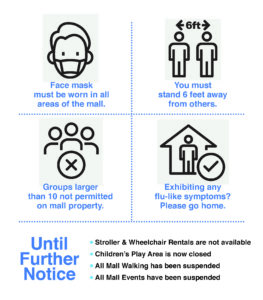 Our top priority is the health and safety of our shoppers, retailers and employees, so when you visit the mall, please follow the below guidelines:
~ Face masks must be worn in all areas of the mall.
~Social distancing: you must stand 6 feet away from others.
~Groups larger than 10 are not permitted on mall property.
~Exhibiting any flu-like symptoms? Please stay/go home.

Until Further Notice:
~ Stroller & Wheelchair Rentals will not be available
~ Children’s Play Area will remain closed
~ All Mall Events, including Mall Walking, are suspended

We will continue to monitor this evolving situation and respond accordingly.  We encourage everyone to follow the CDC guidelines for keeping yourself and your family healthy.

Thank you for shopping at Greenbriar Mall. We will get through this, together.

Our top priority is the health and safety of our shoppers, retailers and employees and we are taking this step to help reduce the spread of COVID-19 in our community.

In support of federal, state, and local efforts to control the coronavirus, all mall marketing programs and events, including group mall walking, are suspended until further notice.

We will continue to monitor this evolving situation and respond accordingly.  We encourage everyone to follow the CDC guidelines for keeping yourself and your family healthy (https://www.cdc.gov/coronavirus/2019-ncov/protect/index.html).

Thank you for shopping at Greenbriar Mall.  We will get through this, together.

Goodwill of North Georgia could not succeed in fulfilling its mission of putting people to work without the support of many community partners and employers. For the last six years, Shelly Baker, Director of Marketing at Atlanta’s Greenbriar Mall, has been a tireless advocate for our organization and is always looking for new opportunities to engage with us.

The partnership between Greenbriar Mall and Goodwill came about after Shelly attended a community partners meeting hosted by Hendon Properties, the Mall’s management company. Shelly recalls being in Athens and hearing a presentation given by Goodwill’s Monica Whitson, describing the vibrant collaboration between Georgia Square Mall and the local Goodwill Career Center. Her immediate reaction was, “I want Greenbriar to be a part of this!” When Shelly returned to Atlanta, she reached out to Brenda Marshall, South DeKalb’s Career Center Manager and thus began quarterly career fairs at the Mall.

Shelly is ebullient about the career fairs, noting that 200-300 job seekers and an average of 45 employers are in attendance each time. She enjoys the great feeling that comes with helping people find employment, which also works to end homelessness in the area. Shelly says that Mall tenants are enthusiastic because in addition to revenue generated from those that shop before or after the fair, these stores are also able to address their hiring needs by participating.

Feedback from job seekers is also positive and Shelly reports that she fields many calls from those inquiring as to the date of the next fair. Other organizations have reached out to Shelly to ask about hosting their own job fairs at the Mall, but Shelly is quick to refer them to Goodwill. Brenda admires Shelly’s loyalty, calling her an “awesome partner who is always willing to help us put our community to work.”

The relationship goes beyond job fairs, as Shelly makes sure to keep the Goodwill team informed about all Mall events in which they might want to participate. While Shelly says she is honored to be recognized for her work, Goodwill is truly pleased to publicly acknowledge the contributions made possible by her dedication. 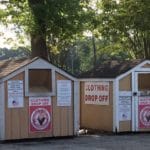 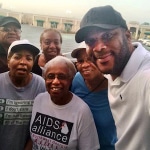 Greenbriar Mall invites you to join our Mall Walkers Program, an exercising program that covers the entire mall. It’s FREE and in a safe and comfortable, climate-controlled environment.

Please visit the Mall Management Office Monday-Friday from 10am-4pm to receive your ID Badge and mileage chart.  To walk in the mall it is MANDATORY that you wear your ID Badge at all times while participating in the program.

Our club members may walk between 7am and 9pm, Monday – Saturday or from 12noon to 6pm on Sundays. If you arrive prior to 10am Monday-Friday and 12noon Sundays, please use the Mall entrance closest to the Food Pavilion. All other doors will be locked.

We will award you a Mall Walkers T-Shirt once you complete 400 miles. One per customer, please.

Please consult your physician before starting any exercise program. If during any part of your exercise program you feel tired or weak, sit down and then seek assistance.

FREE WI-Fi while you enjoy breakfast, lunch or an evening dinner in the Food Court ONLY.

The dinning area is OPEN for dining.

What’s the buzz around Greenbriar? Sign up to find out!
Fill out my online form.